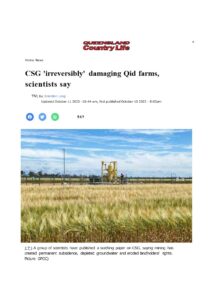 The irreversible damage that mining for coal seam gas can wreak on cropping land through subsidence was a highlight of a scientific paper published late in 2022 by four members of The Royal Society of Queensland. “The coal seam gas industry is causing irreversible damage to the landscapes of the Darling Downs, including its highly productive agricultural soils”, according to lead author Assoc. Prof. Peter Dart, member of QSN member body The Royal Society of Queensland

The ABC gave an account of this threat in a news piece published on 8 October 2022 and Queensland Country Life (paywalled) on 11 October, based on a press release by Prof. Dart.

The Greens published a leaflet summarising this industry – under its Action on Coal and Gas campaign.

A 5-page leaflet by Bill Thompson of LRAM consultants dated March 2012, shortly after the promulgation of the Strategic Cropping Land legislation, explains the history of the GQAL and SCL regulatory regimes (categories of cropping land).

Fact sheets published by the Department and independently by gas company QGC in 2006 explain the basics (19MB). Keep in mind that these are more than 16 years old. A fact sheet by CSIRO Methane Seeps in the Condamine River March 2017 is more recent and includes a useful schematic of the geological strata in the region.

A prescient 2006 internal report Is There a Drop to Drink? by Principal Policy Officer Geoff Edwards warning of the dangers of this industry was leaked and placed in the public domain by a Senate Committee.

Also see the proceedings of a series of three Stewardship of Country webinars held in February and March 2021 by the Royal Societies of Australia. Some of the papers from that series have been published as Volume 133 (1) of the Proceedings of the Royal Society of Victoria.

A submission to the Queensland Government.

A submission based on independent science and engineering
Posted in General Science Library, Royal Society of Queensland
Forthcoming Events

There are no upcoming events.

Powered by WordPress and WordPress Theme created with Artisteer.